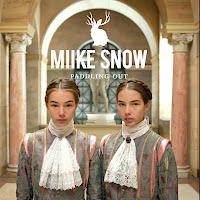 Another single drop and another Miike Snow fan left hanging for more from this Album. "You ... say ... isn't it hard?" Not the most upbeat of hooks, but Miike Snow makes it work in their new single, "Paddling Out," the first official single off their forthcoming second album, "Happy To You," which drops March 27. The beat stutters and stops infectiously as the disco-tinged track goes on: Just try not to dance.