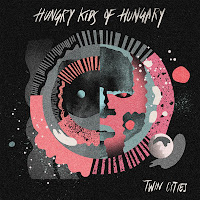 So single #2 from the new album You're A Shadow to be released in March next year. All I can say is; stop whetting our appetite! "Twin Cities" follows more of a surf rock/pop vibe, perfect for an afternoon in the sun. The production this time round seems a lot more cleaner and crisp in my opinion and has a very similar vibe to many of the song released on Escapades back in 2010. Triple J Hottest 100 voting starts soon, don't forget to vote for "Sharp Shooter"!