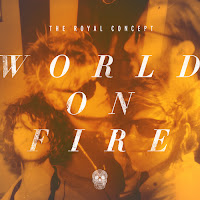 So it's our good friend The Royal Concept who have shared with us a previously unreleased track that was just recently previewed on a tv show called Arrow. It's definitely one of the more dancier tracks that the Swedes have released but nonetheless it is still of the highest quality. In a way i'm glad this was an unreleased song because this isn't the direction I would like TRC to take in the future with their debut album this year.

The Royal Concept - World On Fire