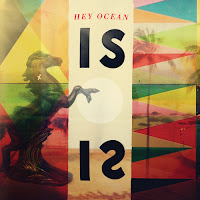 It's a bit of a cheesy song but Hey Ocean! do cheesy oh so very well. The Canadian rockers released this one a while back on their third album IS earlier this year but hasn't received the recognition it deserves. Like I said before it's one of those typically corny/cheesy love songs but at the very same time it is quite catchy. Fun fact, the lead singer Ashleigh Ball is the voice of My Little Pony's Rainbow Dash and one of the Care Bears I think.